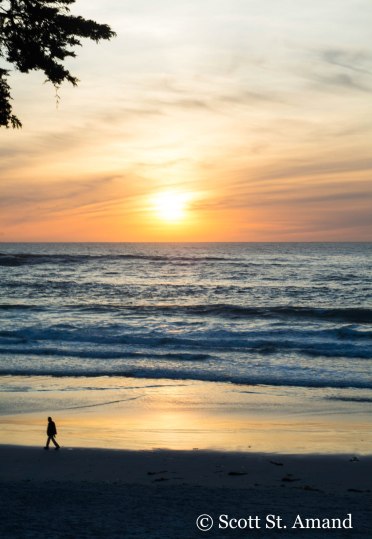 This photograph I took a few years back in Carmel called to me this morning.  Anyone who has struggled with depression, or addiction, or trauma has been this man — walking by himself on a deserted shoreline at dusk, surrounded by beauty and blind to it all.  I finished reading Sylvia Plath’s The Bell Jar last night, just after midnight.  The Bell Jar is a study of a young woman’s descent into madness, and her eventual rise back from the disconsolate existence from which she could not have wrested herself alone.  In many ways the novel is autobiographical of Plath’s own descent into madness, which she succumbed to just a month after The Bell Jar was published in Britain.  Plath had been a successful poet in her years at Smith College, and she feared that The Bell Jar, her first novel, would be poorly received.  She published it under a pseudonym, and only posthumously her husband, the poet Ted Hughes, allowed it to be published under her true name.  The book resonated with me, having, myself, descended into the depths of melancholy, if not madness, only to come out the other side.

Three quarters of the book chronicles the narrator’s descent, while the final quarter memorializes her hospitalization and eventual convalescence.  I found that the descent was uncannily accurate; the details were obviously intimately familiar to Plath.  Having never managed to rise from the ashes herself, though, Plath’s account of the sudden loss of the psychoses that mired Esther (the narrator) for years seemed disingenuous.

Understanding that the recovery, for me, has taken nearly as long as the descent, the season that Esther spent in a sanitarium seemed to me conveniently abridged.  I accept, with a certain level of grace, Plath’s predicament: I have tried to write a novel based on things I never knew, never understood.  Plath never escaped from under the bell jar, but instead withered in the confines of its glass walls like a rose without air or water.  I have known what it is like to feel encircled by the thick glass jar, not strong enough to lift it from the inside, and seemingly damned to an existence under the dome.  Like Esther, the glass was lifted, ever so slightly over time, and now the jar is a memory, albeit a vivid one.  Perhaps someday I will write my own version of the story, giving fair shake to the slow rise from the ashes in recovery.

2 Replies to “Solitary at Dusk”