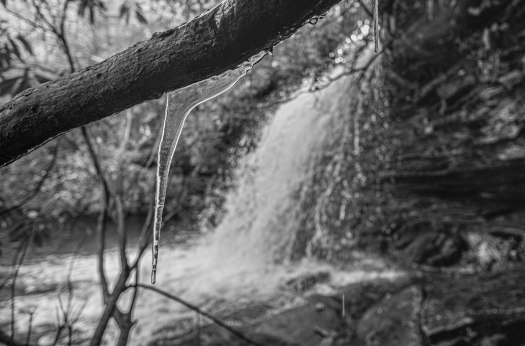 We had our fair share in Winston-Salem, and more than our share during the blizzard in law school in Richmond.  Still, there is something about the chill of the air and the stark beauty of fresh snow that will always be a part of me.  I do not miss it like Anna does.  In her mind, no amount of snow would be enough.  I have learned not to challenge this desire with practical thoughts such as getting out of the driveway or being stuck in a snow drift on the highway.  I don’t want to ruin the Narnian illusion.

It did not snow when we were in North Carolina, though David did message us to let us know that it snowed the very day after we returned.  Anna was, in a word, displeased.  It was cold enough in Panthertown Valley, however, to throw some icicles off of Schoolhouse Falls.  The mud puddles had frozen solid, which made hiking a bit more of an adventure than usual, but it was a sweet reminder that winter does come in parts.

Perhaps next year we will have the opportunity to show the kids snow in North Carolina.  Kemper loves it, and I know that Nora will adore it as well.  (There are few things in which she doesn’t derive some pleasure.)  Nevertheless, this picture will have to serve as a reminder of winter to those of us who nary see icicles or snow.

And for anyone who is wondering, yes, we did crack it off for the kids to eat. 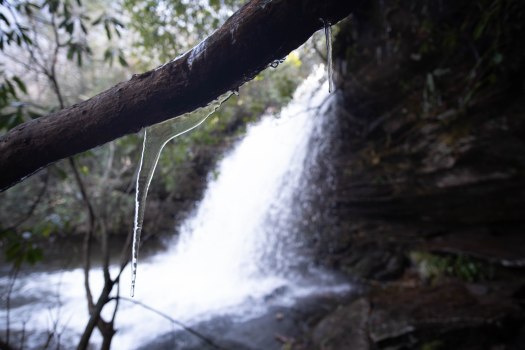