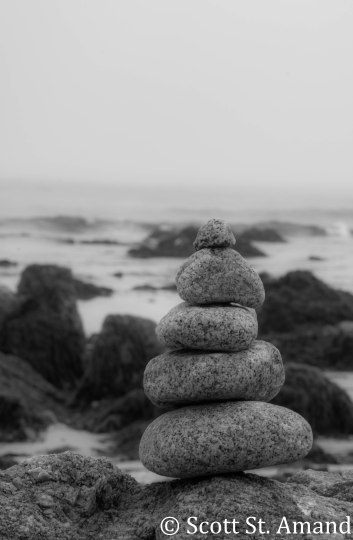 The shore of Spanish Beach, along Seventeen Mile Drive in Monterey, California, is littered with little cairns like the one pictured above – simple stacks of stones left as memories by passersby.  My son, Kemper, toppled this one, just to build it back again, and as I was snapping pictures of the shoreline he begged me to take a shot of his cairn.

We had visited the “Tor House” earlier in the day, and so my mind was filled with thoughts of Robinson Jeffers, the resident poet of Carmel for the first half of the 20th Century.  Likewise, the Sobersanes wildfire was still raging down the coast.  I was struck by a line in Jeffers’ poem, Fire on the Hills: “Beauty is not always lovely…”  The simple sentiment described the fire in his poem and the fire in the valleys raging at that time.  Later, when I was editing the pictures I took, I came across this one, and I remembered ruminating on that line as I took the photograph (as I still remember it today).  Though beauty is not always lovely, sometimes beauty and loveliness can be found in the simplest things – like Kemper’s five-stone cairn, which his small hands slowly stacked in the smoke-filled air of Spanish Beach.