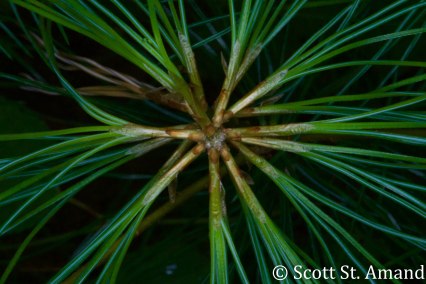 This macro photograph of a Pinus Echinata (short-leaf pine) was taken in North Carolina on the property of a dear family friend, a brother-from-another-mother, if you will.  I was experimenting with my macro lens, which I had purchased just weeks before, and I came upon this sapling with beautiful green needles.  It was not until I had framed the picture in my camera that I noticed the perfect symmetry of the needles radiating from the center.  Nature is beautiful on a macroscopic level, but upon closer inspection–the kind we did as kids, when we were closer to the ground, and the snails were within our range of vision–nature is simply breathtaking.  Whether it be the fractals found on pinecones or even broccoli, there is a divine order to these elements.  For me, there is no other explanation. 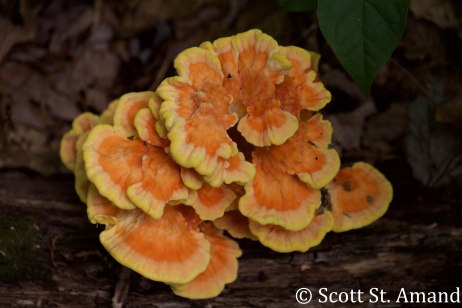 I love to photograph unique mushrooms, like this Chicken of the Woods (Laetiporus Sulphureus), which I came across in Panthertown Creek outside of Brevard, North Carolina.  Even though the mushroom is not only edible, but apparently delicious (tasting like chicken, hence the name), I was not confident enough in my identification at the time to harvest it and cook it that night.  After much research, there are very few mushrooms that look like this one, and those that do are generally edible as well.  Perhaps when we are back in North Carolina in the New Year, I may come across a shelf of these mushrooms…then we’ll see who’s chicken. 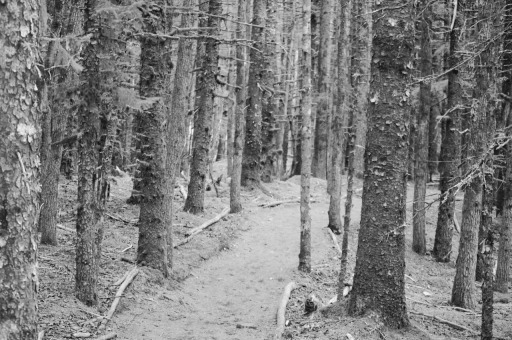 Two roads diverged in a yellow wood,
And sorry I could not travel both
And be one traveler, long I stood
And looked down one as far as I could
To where it bent in the undergrowth.
-Robert Frost
These opening lines from Frost’s “The Road Not Taken” are familiar to most, as are the last two (I took the one less traveled by /and that has made all the difference), but the melancholy of the poem is seldom analyzed.  Frost wished that he could travel both paths at the same time, to be “one traveler” on both.  Frost’s poem is so relatable, both because of its simplicity and rhythmic overtones, and because we have all faced a fork in the road between one path and another.  Like Frost, we have had to make the difficult decision to trod down one path to the exclusion of the other, and like Frost, we wonder where our lives would have taken us had we ventured down the other path.
This photograph was taken in the forest surrounding Glacier Bay National Park in the southeast portion of the Inside Passage in Alaska.  I took it before I discovered my love for photography in earnest, but it has remained one of my favorite photographs.  As I have shared before, photographs of paths are a common and beloved subject of mine.  Like Frost, I am fascinated by those who have come before me–those who have “trodden the leaves black,” if you will.  I am likewise curious who will come after me, and whether they will see what I saw in the continuum of the path–its past, my present, and its future.  Perhaps this one will wash away, and a new one will be cut through the undergrowth in its place.  Perhaps it will fall out of favor, in lieu of a straighter, more direct path.  Perhaps someday a young poet will be faced with the choice between the two, and he will think of Frost like I did those years ago.
58.301944 -134.419722 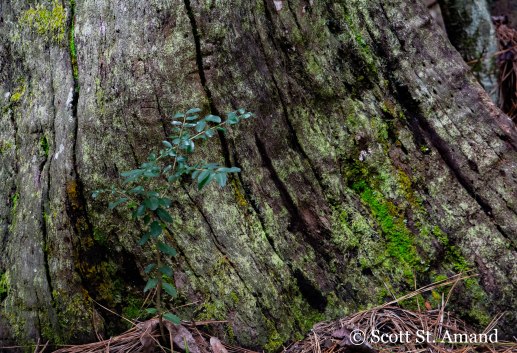 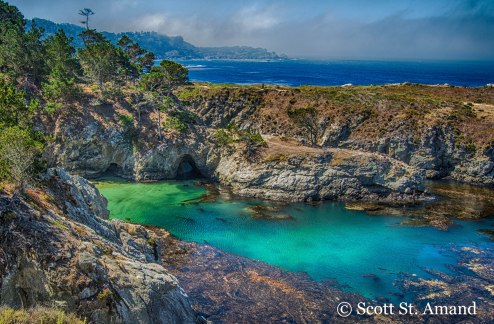 The colors of China Cove in Point Lobos State Natural Reserve are surreal.  The first time I saw China Cove was on a postcard in Carmel.  That postcard, and this photograph do not do justice to the emeralds and turquoises of the water, framed by dense, dark bull kelp.  I took this picture before I came into possession of a ultra wide angle lens, and so I am looking forward to capturing the whole cove when we go back to California next. 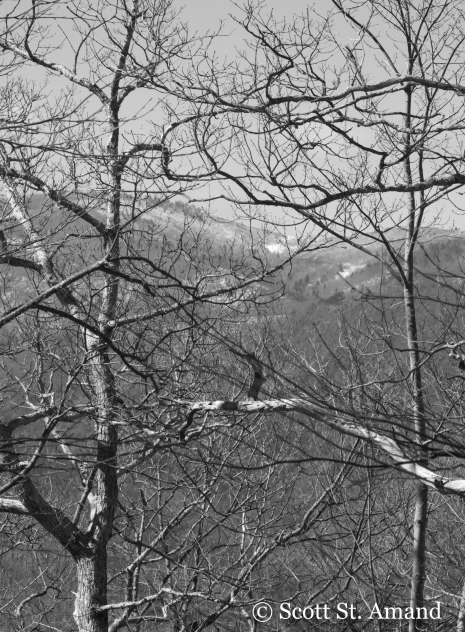 Nostalgia is a beautiful word.  It is a is learned formation of a Greek compound, consisting of the Homeric word νόστος (nóstos), meaning “homecoming” and ἄλγος (álgos), meaning “pain” or “ache”, and was coined by a 17th-century medical student to describe the anxieties displayed by Swiss mercenaries fighting away from home.  Nostalgia is a sentimentality for the past, typically for a period or place with happy personal associations.  For me, nothing evokes nostalgia like the mountains of North Carolina.  The earliest associations are of visiting the Smoky Mountains with my family when I was much younger, and later the mountains close to Winston-Salem, which were only a short drive away from Wake Forest.  For reasons I cannot explain, the feelings are strongest in the winter, when the wind has stripped away the leaves from the branches, and you can see through the skeletons of the trees through the valleys and to the peaks.  This photograph, taken outside of Brevard, North Carolina, evokes so many strong memories – all positive – which was not always the case in North Carolina.  Hindsight and nostalgia are curious like that, though.  No matter the number of disheartening days and nights, I still long to be back in the mountains.  We’re going up for a week after Christmas, and I know the feelings will rush back, satisfying the homesickness for a while.  Until then, in my mind, I’m going to Carolina… 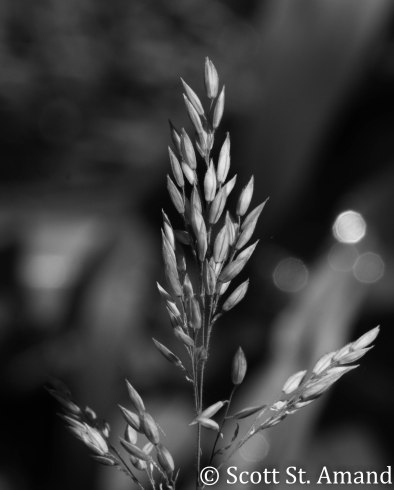 This photograph of a seedhead of tall ryegrass was taken on a high in Panthertown Creek, outside of Cashiers, North Carolina.  It is a simple photograph, and one which I would normally have skipped right over when I was sifting through the hundreds I took that day.  Nevertheless, something caught my eye in the simple elegance of the seeds and the blur and bokeh of the background.  Although not actual wheat, this native grass reminded me of the old aphorism “to separate the wheat from the chaff,” which is exactly what I do when I cull through the photographs to find the “keepers.”  The irony is not lost on me that the “chaff” nearly included this photograph.

The word silhouette is derived from the name of Étienne de Silhouette, a French finance minister who, in the mid eighteenth century, was forced by France’s credit crisis during the Seven Years’ War to impose severe economic demands upon the French people, particularly the wealthy.  Because of de Silhouette’s austere economies, his name became synonymous with anything done or made cheaply.  Prior to the advent of photography, silhouette profiles cut from black card were the cheapest way of recording a person’s appearance.  I think that this silhouette of the female photographer on the rock is one of my best black and white compositions.  The mist and morning layer in the background contrasts sharply with the wet stone in the foreground, with the tiniest break in the line of the outcropping (in perfect thirds, I might add) made by the photographer.  I cannot say that my eye was drawn to her initially, but once it caught her, my eye became curious and could not look away – and if I did, I was always drawn back. 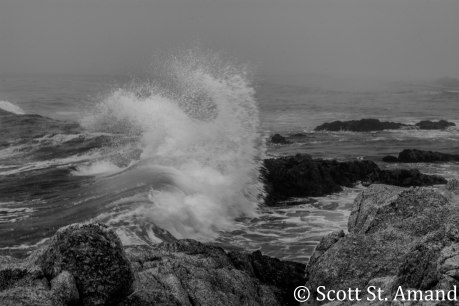 I took hundreds of photographs, waiting for the waves to crash on the rocks at just the right angle, with just the right force.  This photograph evoked feelings of “The Great Wave” the famous woodblock print by by the Japanese ukiyo-e artist Hokusai in his series Thirty-Six Views of Mt. Fuji.  It also made me think of the creation myth of Aphrodite, which unlike Botticelli’s Birth of Venus, was, by all accounts, a violent affair.  Although Aphrodite can be broken down into “aphros” (foam) and “ditos” (risen), there is no direct etymological derivation.  This did not stop the Greeks (Hesiod, specifically) from crafting a story of Aphrodite rising from the foam after a great battle between Cronus and Uranus, which would foreshadow the same father-son battle between Zeus and Cronus.  In the whitewash, I can almost see Aphrodite throwing her hair back, casting off the spray as she nears the coastline.  But then, I suppose that’s what you get when your two favorite subjects in school were Latin and Art History…

Click here for a larger version, as well as a more stylized version. 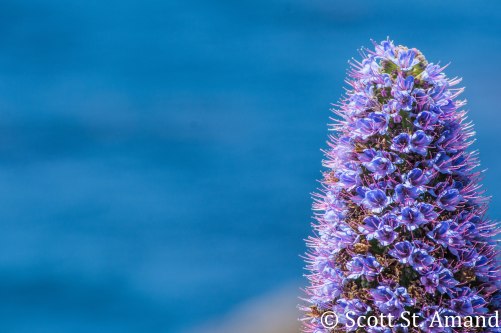 This post was originally titled “Native Beauty,” as I had seen these beautiful purple flowers up and down the coast near Carmel, California.  With a bit of research, however, I found that these stunning flowers are an invasive species known as Pride of Madeira (Echium candicans).  In fact, forestry officials are removing them from native plant communities as part of habitat restoration efforts in coastal parks such as the Golden Gate National Recreation Area.  The genus name is from an ancient Greek word for the plant. It is derived from “echion,” with the root word “echis” meaning “viper.”  There are conflicting etymological justifications for the name, including that the shape of the seed resembles that of a viper’s head, and  that Echium Vulgare, a related plant, was a historically thought to be a remedy for the adder’s bite.  Candicans or “shining white” refers to one of the more famous varietals in Madeira, Portugal, where the plants originate.  It was originally referred to as Echium Fatuosum, which is where the “pride” in the name originated.  In California, however, the purple E. Candicans varietal shown in the photograph is the most common.