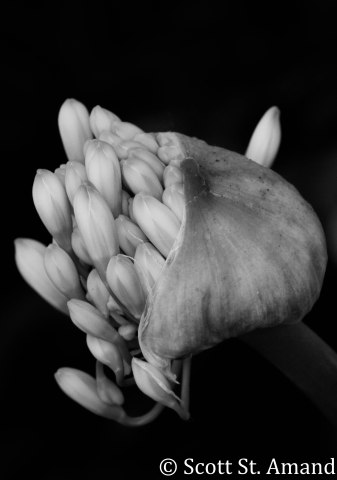 This photograph of an allium (a member of the garlic family) breaking out of its protective sheath has been one of my favorite photographs since I took it a couple years ago.  To me, this photograph is evocative on so many levels.  It was taken, like Herrick’s Bud in my in-laws’ garden in Carmel, California.  Although I thought that the emergence would be relatively slow, I came back the next day and the buds had fully emerged, with the sheath having shriveled up and hanging by the wayside.  The ephemera of nature is simply amazing to me.  I hope you enjoy this photograph as much as I do.

This photograph was taken on the moors outside Haworth, West Yorkshire, England.  The two figures in the distance are my mother-in-law and her brother, who left my wife, Anna, and I to scramble up and down the moors in a vain attempt to keep them in our sight.  The “walk” (and I use this term loosely) was gorgeous in hindsight, as the pictures attest; however, during the trip (which I contend was on average 98% vertical), I thought my legs were going to give out at least three times.  Nevertheless, I made it, and that in and of itself was an accomplishment.  The photographs that I took were icing on the proverbial cake.

This photograph was taken cruising up the inside passage in Alaska.  I have never been surrounded by more natural beauty than the untouched wilderness of Alaska.

In an series of three poignant essays, F. Scott Fitzgerald once wrote that he was fractured like a dinner plate that you would hide from the neighbors if they came over.  One of the greatest writers of the early 20th Century had indeed “cracked” under the pressure of his own success.  I identified with Fitzgerald’s essays—and Fitzgerald himself—on many levels, except that once cracked up, Fitzgerald never ventured to put himself back together again.

The Japanese have a beautiful word, kintsugi, which is the art of repairing broken pottery with lacquer, generally mixed with powdered precious metals like gold.  Kintsugi, however, stretches far beyond the art form.  It has become a philosophy, which accentuates the breakage and repair of the object as evidence of its history—rather than something to disguise or sweep into the dustbin.  The fractures are part of the object’s story, part of its beautiful memory.

We are all broken, some of us more than others, but these faults, these breaks shape who we are when we come out the other side—but only if we venture to put ourselves back together again like a shattered vase in the hands of an artist. 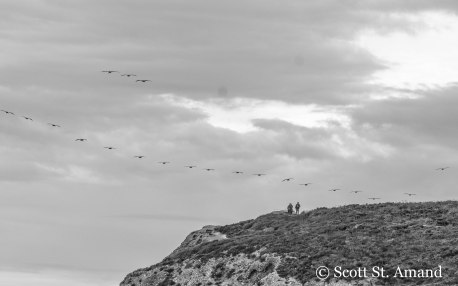 This photograph of a large pod of pelicans was taken at Point Lobos State Natural Reserve, just outside of Carmel, California.  Pelicans have significant historical and cultural value, including in Egyptian mythology, where the pelican was believed to be able to to prophesy safe passage in the underworld for someone who had died.  Interestingly, Alcatraz was so named by the Spanish because of the large number of pelicans roosting there.  The word alcatraz is itself derived from the Arabic al-caduos, a term used for a water-carrying vessel and likened to the pouch of the pelican.  In the Christian context, pelicans were viewed as a paragon of piety based, in part, on the belief that a mother pelican was particularly attentive to her young, to the point of providing her own blood by wounding her own breast when no other food was available.  As such, pelicans are associated with the Passion of Christ and the Eucharist.

Taken at Big Talbot Island, north of Jacksonville, Florida, the lines and shadows of this photograph of driftwood cobbled together on the beach draw the eye to the center of the mass of wood.  After the hurricane last year, this particular grouping of driftwood is no longer on the beach, so I was fortunate to capture it when I did.

This photograph was taken in Brevard, North Carolina.  The property was once home to a summer camp and hippie commune, and was frequented by Woodie Guthrie, Pete Seeger and their ilk.  All that remains of this cabin are low walls and these steps.  Though I usually opt for monochrome photographs, the colors of the stones were so unique that I did not want to lose them in converting the photograph to black and white.