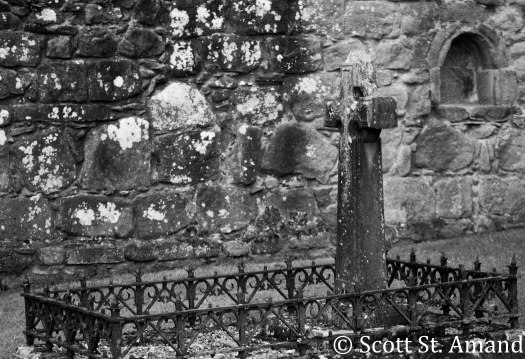 Those who walk uprightly enter into peace; they find rest as they lie in death.
Isaiah 57:2

I have met many men who could quote the Bible and many men who preached for a living.  Yet, I have never met a man more learned in the Bible and its teachings than Anna’s great-uncle Michael, who passed away yesterday.  Michael was a lay preacher, and he dedicated his life in an uncommon way to God.  Michael was Anna’s grandfather’s brother, and he was predeceased by his wife auntie Pat.  David, or Ardy as Anna and her sisters called him, was wise beyond measure, and was a strong student of religion.  As successful as he was with his mill, his business, and his family, even David would admit that he could not hold a candle to Michael’s vast ecclesiastical knowledge.

I regret not seeing Michael the last time I was in England.  I hadn’t seen him since David’s death nine years ago, where he spoke so eloquently about death and the afterlife.  His death leaves a void in our family—I say “our” because Anna’s British family has adopted me as one of their own.  It also leaves a void in the community, because a gift and a dedication like Michael’s is almost unheard of these days.  Very few laypeople dedicated their lives to the study of God’s words like Michael did, and even fewer such people exist today.

We will go to church this weekend, and I will think fondly of Michael finally being home.  His belief was absolute, and I know that he did not mourn his passing but instead embraced it with the knowledge that his “light and momentary troubles” in this life achieved for him “an eternal glory that far outweighed them all.”  Corinthians 4:17.

I rarely quote from the Bible, mostly because I know so few verses, but also because my faith has been tested so much over the past ten years.  With faith restored, I do not feel as hypocritical drawing from the knowledge that has been set down by generations of believers.  And so I close with a quote, as Michael would have done.

The provenance of this post is unknown.  I took the photograph right as I began to become serious about my photography.  The post is within the ruins of what used to be a gym for a boys camp in North Carolina, but the property was also a hippie commune, which the likes of Pete Seeger and Woody Guthrie graced with their presence.   The photograph is a simple composition, and if I would have taken it now, this one would likely have found itself on the cutting room floor.  Nevertheless, the photograph is nostalgic, and as my posts have shown, this is a flaw of mine. 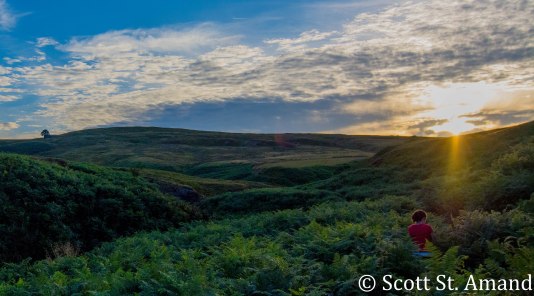 These bracken ferns on the moors in Yorkshire are substantially shorter than those in the lake district; nevertheless, they nearly engulfed my wife, Anna, as she tried to follow the path cut between the fiddleheads that popped out from the skeletons of heather, long since overcome by the dark green ferns.  This photograph was taken at dusk outside of Haworth, England, where the Brontë sisters lived and wrote.  Their stories were heavily   influenced by the moors and the hardy people who lived on them (especially Wuthering Heights).  Indeed, in this photograph, on the horizon to the left, there is a lone sycamore next to the barely perceptible ruins of a farmhouse (Top Withens), which is said to be the inspiration for Wuthering Heights.  My mother-in-law grew up among the ferns on the moors, and she is closer to nature than anyone I have ever met.  Yorkshire does something indelible to a person.  The first time you walk over the top of a moor and look down into the Worth Valley at the train steaming along the tracks towards Leeds, you realize that you are in a living snapshot of a much simpler time. 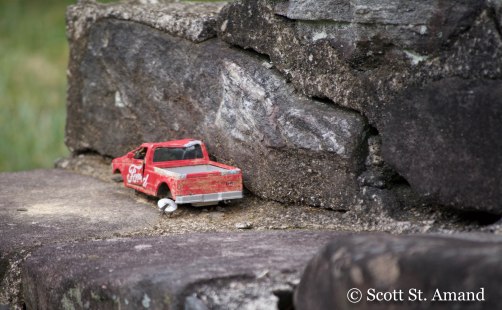 This quote sums up the Japanese philosophy of wabi-sabi, which has no direct translation in English. “Wabi” is said to be defined as “rustic simplicity” or “understated elegance.” “Sabi” is translated to “taking pleasure in the imperfect.”  This photograph of an abandoned toy truck captures the principle beautifully.  The imperfection of the truck (and even the photograph thereof) is evident.  Although the truck lost its wheels long before I took this photograph, its purpose has not yet been fulfilled – not completely.  It is now immortalized in this photograph, which has subsequently become the subject of this post.  Nothing is finished, really.  This post will be replaced tomorrow by a less melancholy subject, and slowly it will fade from memory.  Nothing lasts.  The Romantic poets were students of the ephemeral, finding beauty in the brief life of all things.  Even the Augustan poet Horace, famous for his introduction of the phrase “carpe diem,” was fascinated with fleeting time.  There is a beauty to this photograph, though; however, I could not put my finger on it before I connected it with wabi-sabi.  Now it has become clear why its perfectly imperfect composition and subject evoked such strong feelings of melancholy on the one hand, and pleasant nostalgia on the other.  The Japanese phrase captures in two words, what it has taken me a lifetime to understand.

I studied art history in high school and college, learning from incredible teachers and professors.  I went to museums and saw visiting collections, but I never stood in the middle of St. Peter’s square or under the arches of a gothic cathedral until 2006 when I stood in La Seu, visited Pompeii, and walked into the middle of the Piazza San Pietro, marveling at the history that surrounded me.  Yet something about Bolton Abbey, the skeleton of which I captured in this photograph, struck me more than even walking through the ancient streets of Pompeii.  Perhaps because I was older, I had a new appreciation for the feats of architecture.  Perhaps, too, it was because I was alone with my camera and my thoughts, not being bustled about by tour guides or other eager tourists.  Whatever the difference, Bolton Abbey was more majestic to me than even St. Peter’s.  It is a memory, a remnant of time gone by, of the monarchy, of the Reformation, and of the shifting sands of faith.  While other abbeys were deconstructed during the Dissolution of the Monasteries, and all that remains of them is rubble, Bolton Abbey remains – like a fossil, its bones bared and resolute.  When I stood in the nave, I placed my hand on a monolithic column, lingering for a moment and hoping to physically connect to the priory.  With the weathered stone pressed against my hand, I wondered how many generations had set their hands upon the stonework, and at that moment I felt truly connected to a continuum of time – those who had come before and those who would come after to admire the remnant as I had.

This photograph was taken in Brevard, North Carolina.  The property was once home to a summer camp and hippie commune, and was frequented by Woodie Guthrie, Pete Seeger and their ilk.  All that remains of this cabin are low walls and these steps.  Though I usually opt for monochrome photographs, the colors of the stones were so unique that I did not want to lose them in converting the photograph to black and white.

This photograph was taken outside of Haworth, West Yorkshire, England during a walk about the moors.  The beautiful wall has been disassembled by hand in the middle to make a small passage for wanderers, like we were, to pass through.  Many, if not most of the walls were installed in the Victorian era as a result of the Inclosure Acts, which required landowners to enclose their land to stake a claim to it – a departure from the manorial, open field system, an antiquated remnant of the feudal system.  As with many of the sturdy walls in Yorkshire, this one has no mortar, but instead relies on the skill of the stonemason to create an edifice that has lasted and will last for many generations to come.  Notably absent from this picture are the two curious Swaledale sheep (the breed most often found on the moors) that accompanied us assiduously through these large, adjoining acres.

This photograph was taken through an arched doorway at Bolton Abbey in North Yorkshire, England.  Looking through the portal, which was remarkably intact for a 12th Century Augustinian monastery, you can see the priory in various states of ruin.

Looking across the moors at the ruins of Top Withens, the farmhouse that was the inspiration for the Earnshaw family house in Emily Brontë’s Wuthering Heights.   This photo was taken just before dusk on a hike in Haworth, West Yorkshire.

Looking through the choir to the apse in Bolton Abbey, Wharfdale, UK.