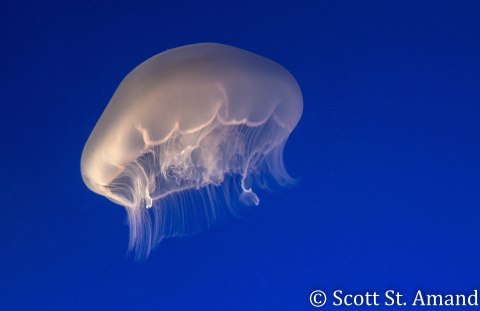 This photograph of a Aurelia Labiata or Moon Jellyfish was taken at the Monterey Aquarium.  Usually swimming in schools, this jellyfish had separated itself from the rest of its spineless (invertebrate) kin and was floating along just far enough away that I could get a shot of it by itself.  The beautiful wisps of stinger-rich tentacles fluttered in the current of the large tank, and I was mesmerized by them like the little children whose noses were plastered against the thick glass.  Kemper, who was three at the time, was enraptured by the sheer number of jellyfish that effortlessly floated by, and we had to explain that though beautiful, they were dangerous.  I could tell that he did not fully grasp Jeffers’ line, “Beauty is not always lovely.”  But when understanding washed over him, I was momentarily saddened that this lesson had to be learned at such a young age.  Soon, however, he was lost again in the schools of jellyfish not, perhaps, to give another thought to the lesson for a long time to come.