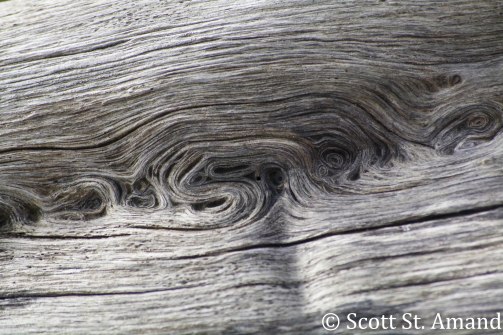 As I have mentioned before, the patterns of nature fascinate me.  The swirls and whirls on this driftwood tree, most likely a live oak (Quercus Virginiana), caught my eye immediately when I took to the beach with my macro lens.  I had passed the tree numerous times before, camera in hand, but I overlooked the fascinating, almost embryonic patterns along the large branch that reached towards the ocean.  I cannot believe that I missed it, but in hindsight, I was not looking for the little intricacies of nature when I first came to Boneyard Beach; instead, I was looking for patterns in the trees strewn about the sand, which I found in the hulking driftwood trees.

A certain bit of melancholy washed over me as I returned a few months ago, two years hence, and two hurricanes since.  The beach was not as I remembered it.  The huge live oaks were still there; not even a category three storm could have moved them.  Yet the smaller ones, like this one with the whirls, had been washed away.  Perhaps they will be rolled back to shore by the heavy waves of a nor’easter, or, perhaps, by another hurricane.  But for now, they were gone.  I brought my son to the beach when I returned, hoping that he would find the same beauty in his five year old eyes.  He, too, was enamored by the tulip snails, and he let go of his fears long enough to sidle up the trunk of one of the supine live oaks.  I let go of the melancholy, as well, and I ventured to find new patterns in the niches where limb meets branch or branch meets trunk.  Someday, Kemper will be old enough to mind the patterns, but for now, I will let him find the joy in the bigger picture.