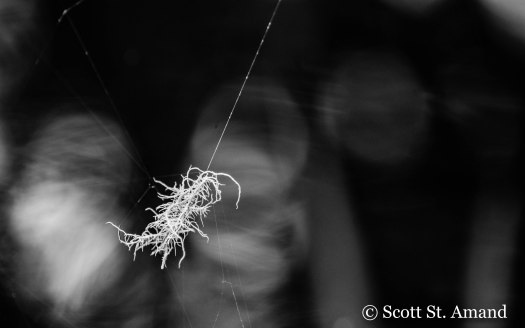 Nature is a metaphor.  This little bit of grey-green deer lichen (Cladina Evansii) dithered in the wind, caught between filaments of a ruined spiderweb, most likely the work of a golden orb weaver (Nephila Clavipes), which are common in North Florida.  A yellow pigment in the silk lends it a rich golden glow in suitable lighting.  The silk is eight times stronger than steel, and so this small clump of lichen was anchored securely, not likely to blow away even with the fiercest winds.  Though lichen are epiphytes, existing on air and rain, without roots, and would survive just fine as I found it, I did have a certain pang of melancholy that it had been separated from its kith and kin that carpeted the edge of the path near the creek where I found it.  I felt a certain kinship with it, being held in all directions by almost invisible binds.  Yet I did not loose it from them, instead I insouciantly took a few snapshots of it to memorialize its predicament.

When I returned home to edit the photographs, I was struck by the photo even more than I had been by the scene itself.  The high aperture effectively blurred out all but the lichen and the filaments, which I could barely discern in the low, dappled light of the swamp.  It seemed fitting, that the camera would capture this play of light and elements exactly as it did.  If nature is a metaphor, the camera is a poet, which preserves the play with deeper precision than memory ever could.  In many ways, this is why I love photography so deeply.  The world in which I live is a story to be told.  I have written poems and novels and plays, and yet, a good photograph evokes as much meaning, if not more.  I must confess the truth of the trite aphorism, “A picture is worth a thousand words.”  The longer I consider a photograph such as this, the more images and thoughts and feelings are evoked–more than I could have ever gathered by simply looking upon the object or scratching out a villanelle.  The blur and the bokeh of the water in the background has meaning;  as does the tack focus of the lichen stands out sharply against the insignificance of the streaks of sunlight on the tannin-stained surface of the creek on which my eyes would have instinctively refocused.

Perhaps I have an eye for these things, or an innate talent that lets me capture such meaningful photographs as the ones I have shared in the past, but I cannot help but to feel like the monkey banging on the typewriter inadvertently producing a sonnet.  I feel a great sense of fraud, or perhaps a sense that I am a mere instrumentality of something much greater than myself.  I wonder if Wordsworth or Ansel Adams ever felt like this–heaped with praise for simply capturing what nature served to them on a platter.  If they did, then I share a deep kinship with them as a mere documentarian of nature.