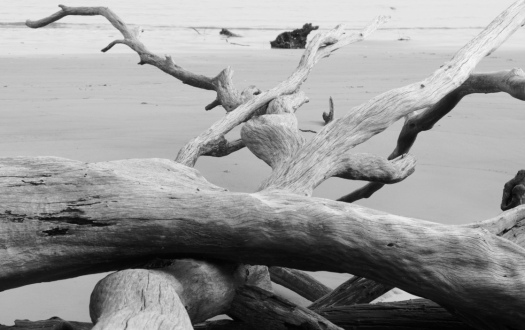 September hurricanes framed this photograph of three water oaks (Quercus Nigra) astride one another on the shore of Little Talbot Island.  I took this photograph three years ago, and it remains one of my favorites of the driftwood beaches of Northeast Florida.  I returned to this spot with Kemper in early September, three hurricanes later, and the topography of the beach had changed radically.  The hulking live oak (Quercus Virginiana) skeletons with their naked root clusters, ten feet in diameter, perched in the air remained, but the smaller water oaks had been scattered by the waves.  This arrangement of trunks and limbs was no more.  I was disappointed that I could not point out to Kemper where I had taken the photograph that is displayed on a canvas in our living room, but then my mind wandered to the Romantic poets (which happens more than I care to admit).  They found beauty in the ephemeral existence of objects and life.  This photograph is my Ode to the West Wind, which rent the trees asunder with its driving gales and its nautical forces.  Like Blake, and Wordsworth, and Shelley, and Keats, I captured something fleeting, though, admittedly, I did not think that these huge skeletons were mutable, even through the power of a glancing blow of a hurricane.  But nature is ever-changing, and I took this for granted three years prior when I framed the scene in my camera and released the shutter.  It is a lesson to me to not underestimate the power of the elements and to capture what I can, when I can, lest it be gone in another season.