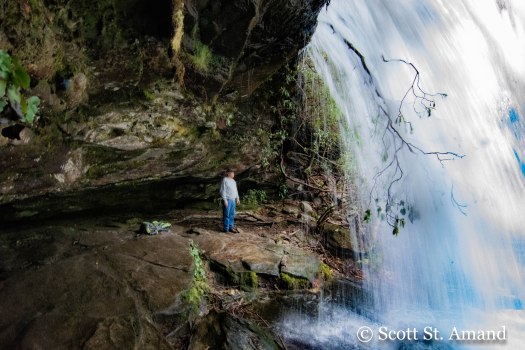 This photograph of my dad standing behind a waterfall was taken in Panthertown Creek near Brevard, North Carolina.  We hiked about three miles and were prepared to turn around, when we ran into a sweet older lady who said, “The falls are really running today.”  We asked for directions, and she pointed us down a side path, which we traversed for about ten minutes until we heard the roaring of the waterfall.  I took many photographs and wanted to get closer.  I found a not so well-worn path, and my dad and I followed it until we found ourselves behind the waterfall.  He remarked that although walking behind a waterfall had not been on his bucket list, it should have been.  It was truly remarkable.  The hike behind the falls had been tough, but it was so very worth it.

One Reply to “Behind the Falls”