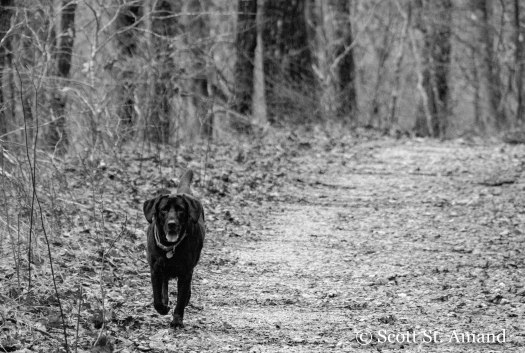 My parent’s black lab, Emma, was our constant companion on our hikes in North Carolina.  We hiked five miles in Panthertown Valley, and she must have covered at least twice that.  She would run ahead, just far enough that my mother was still in her line of sight, and then run back, as if to report that there were no obstacles in our path to come.  I took many photographs of her along the way, but this one best captured her reconnaissance endeavors.

We have had a number of dogs growing up, and they would all have been faithful companions on the walk.  My parents’ dog, Tam, whom I remember as a kind old yellow rug, came first, and then we rescued Sadie, a bright red golden retriever, who I grew up with as a child.  Dylan, Emma’s great-uncle, came when Sadie was getting along in her years, and brought out the youth in her once more.  Hannah, who was the mother of my sister’s lab Zinger, was my girl all the way through college and law school.

Anna and I now have Zoe, whom we rescued ten years ago.   She is completely deaf now, and Anna claims her sight is going, too.  She has been there through the ups and downs in our marriage, at our kids’ births, and through it all with us.  I know that we will have to say goodbye, sooner rather than later, and it breaks my heart to think that one day, she will not be the first to greet me when I come home from work.  That will be a devastating day.

For now, I am patient with her as she lolls through the backyard when I let her out, stopping and sniffing at the wind, using the one sense that has not yet failed her.  She moves more slowly, and she will not get up from her bed in the morning until she is ready to take on the new day.  I admire this about her.  I took many photographs of her on this trip to North Carolina, because she was in her element in the cool mountain air with new smells to pursue laconically as she ambled ten steps in front of me at all times.  She is more wary of leaving me behind than Emma ever will be, and I am wary of ever leaving her behind either.

One Reply to “Emma”