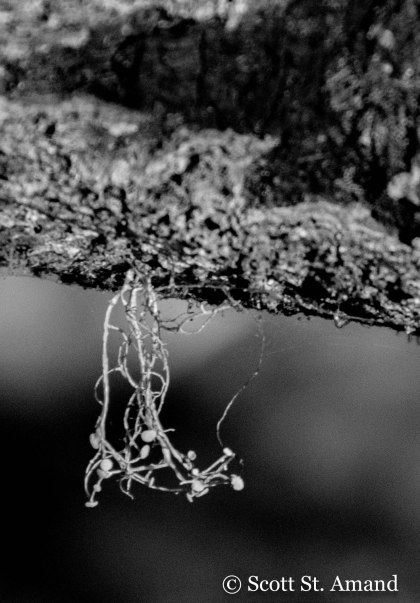 This little piece of lichen (Usnea Florida) was the first photograph I took in North Carolina when we arrived in late December.  I had always known that the property was surrounded by natural beauty, but I took for granted the embarrassment of natural riches that the property had to offer.

I have spoken before about my reconnection with nature which coincided organically with taking up photography seriously in my late twenties and early thirties.  I had already begun a phase of my photography journey in which I was concentrating on lichen, and mushrooms, and other overlooked pieces of nature, and so when I arrived in North Carolina with that focus, I was almost overwhelmed by the proliferation of mushrooms and orchids pushing up from beneath the dense layer of fallen leaves.

As I mentioned previously, we go to North Carolina with my family – my parents, my sister, my niece and our clan of Nora, Kemper & Anna.  As much as I enjoyed spending time with them (and it was the best vacation we have ever taken in that regard), when everyone else was resting from a long hike, I would often try to sneak off with my camera to capture the little bits of nature that ordinarily go without notice.

Invariably, my father or mother would want to come with me, as they get to spend so little time with me during the rest of the year because of work (even though we live less than half-an-hour apart).  I was always happy to have them come along, and my dad even took it upon himself to be my “spotter” when I was so busy behind the lens to quite literally see the forest for the trees.  When I was accompanied, however, I always felt that my pace quickened, and I was not able to amble as slowly as I would have liked to take in as much as the wilderness had to offer.  That being said, I would not have changed those walks with my parents for anything.  Someday I will get the chance to walk alone through the woods, and I know then that I will long to have my “spotter” with me (or to have my mother asking whether I am taking my vitamins regularly, as mothers are wont to do).