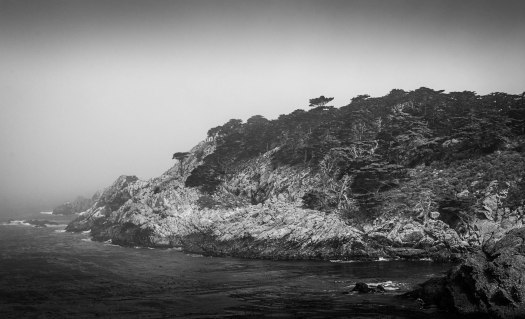 We head out to California in less than a week.  I have prepared for this trip (photographically, at least) more than any other I have taken in the past.  As the house my in-laws own is to be put on the market after our visit, it may be the last time in a long while that we can make it out to Carmel, and I wanted to make the most of my time in the most picturesque part of the continental United States that I have ever visited.

I bought a new camera (a D7500) and a new lens (a Nikon 17-55 f/2.8) for the trip, and I have been compulsively watching Youtube videos on various photography techniques and also tutorials on editing in Lightroom and Photoshop.  This is one of my older photos of Point Lobos, and though my technique in taking the photograph was not optimal, the original turned out fine by my standards.  With new post-processing tools, though, the photograph is far more evocative than its previous iteration.

I am thrilled to be going out to California one last time, and my kit is fully stocked.  I have new tools and new techniques, but above all, I have a much deeper appreciation of this last rare chance to capture the once-foreign coastline that has become so familiar to me in the last five years.  I have a feeling that the photographs are going to be more technically sound, but more than that, they will carry a greater weight about them.

I’ll be in touch…